As the introduction of robots into production processes continues to pick up speed, industries are moving towards the vision of a "dark factory", factories without any human workers.

According to the “World Robotics Report” published by the International Federation of Robotics at the end of 2018, the robot density, an indicator of the degree of automation in manufacturing plants and processes, continues to increase. 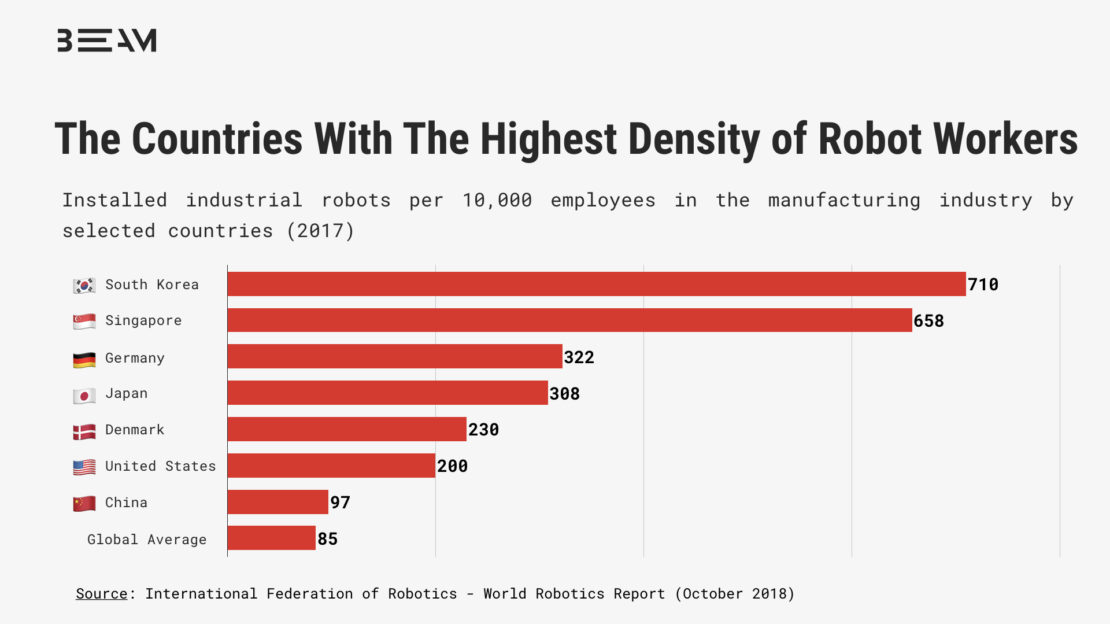 When comparing different regions, it shows that in the German manufacturing industry, there are 322 industrial robots per 10,000 employees; in the United States, 200 robots were active per 10,000 employees. In China, manufacturing robots are still relatively rare.
On a continental level, the average robot density in Europe amounted to 106 units, in the Americas 91, and in Asia 75 units.

As countries like South Korea, Germany, and the United States are exhibiting denser robot adoption, you might wonder what is the rationale for the substantial regional differences in robot density?
The largest industries in these countries are the automotive and electrical/electronics sector, which are generally the largest adopters of robots globally. As robots can handle small parts at high speeds and with very high degrees of precision compared to human workers, they enable manufacturers to optimize production costs while ensuring high quality. As the production of cars and electronics has become increasingly complex over the last decade; many manufacturing processes now require robots to enable automation solutions. Generally, both industries usually require a type of work that can be easier replaced by robots than jobs in the service sector, where direct interaction with other people is indispensable.