What Bees Can Teach Us About Logistics

Reducing internal transport is challenging, but not so for bees. Bees operate their honeycombs highly efficient and adapting their concept can save transport costs.

It is startling what we can learn by taking a closer look at habits in nature. In this new regular series, we want to explore what logistical lessons nature has to offer.

Bees have many incredible abilities. In the newspapers, we read about their importance for our biodiversity and our food production: They pollinate plants in our ecosystem and help to produce fruit and seeds. Their economic output is estimated at 500 billion Euros a year.

What is mostly unknown is that bees are excellent in logistics too. They create combs to store their honey and to feed themselves throughout winter when it’s impossible for them to go outdoors to have their meal. The creation of the honeycomb is the duty of young bees. They have special glands under their belly which allow them to excrete wax in a process similar to the way we humans sweat. In their efforts to store the honey with as little wax as possible, the bees created the shape of a six-sided tube structure, a single honeycomb, which is then surrounded by a further six of such combs. The central comb touches all surrounding combs over its entire wall surface, leaving no wall area wasted and balancing out the forces onto walls from neighbouring cells. That is a smart solution to the bees’ problem, but not only.

Factory layout planning is a complex process that includes the positioning of operational resources and directing material flows. Resources can be departments, machines and work stations located on floor space in a specific manner. Material flows link products and carry them along particular routes throughout the factory. In an ideal world, assets and flows are optimally aligned such that high activity resources have access to numerous routes and heavy traffic routes are shorter than others with low traffic.

It becomes apparent that the interplay of resources and flows should dictate the positioning of resources to make the process as lean as possible. However, is it that straightforward to be put into practice?

Finding the optimal layout for factory operations is an assignment problem, and these are considered one of the toughest challenges to solve. Actually, in most logistical cases it cannot be solved entirely since the number of facilities, locations, flows as well as distances are too much to handle for computer optimization. Approximation procedures are being used to improve positioning as well as routing. That’s when it’s worth looking at bee honeycombs and thinking about what we could learn from their internal transport concept.

A recent study examined the impact of doing so. In a factory the real material flow data was gathered and based on it, resources were simulated in a rearranged honeycomb-like set up. High activity facilities were placed in the centre of the floor space, lower activity facilities were positioned further away from the centre. Intensive material flows were kept short and as central as possible, while low-intensity routes were located further away from the centre. The central cell had six cells around it and numerous options for material flows, similar to the central honeycomb with its radial transport to neighbouring combs. 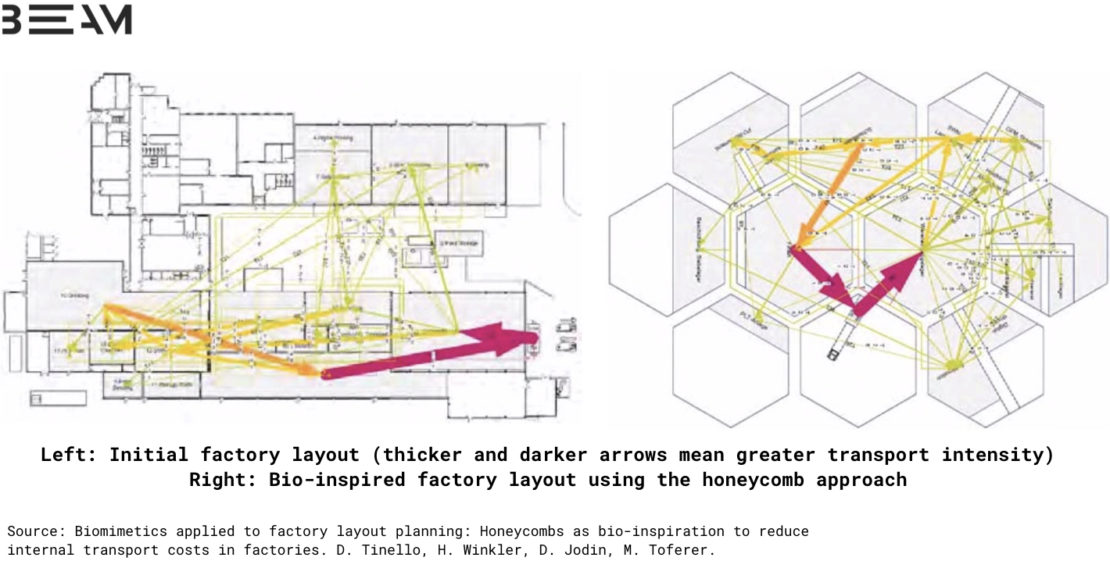 The effect of the honeycomb layout is startling. Internal transports of the factory could be reduced by 22% compared to the original design. This was achieved by using a straightforward and visually understandable honeycomb concept that has been around for centuries. The honeycomb approach is a simple tool, but it can clearly keep pace with traditional computer-based optimization.

We are wondering why this approach is not applied more widely. What has your experience been with optimization of layouts such as the honeycomb method?