The Self-Driving Truck Race Is Heating Up

With more self-driving truck companies emerging, more sophisticated technologies being tested, new laws being considered and funding levels rising, the date when we will see automated trucks on the roads is getting closer.

A look at the most promising startups

The five highest-funded autonomous truck startups have raised a total of $339M, with TuSimple being the clear frontrunner. They raised their latest Series D early this year bringing their total funding amount to $178 million. This round gives them more than three times the funding of Embark, its closest startup rival. At a valuation of $1.1B, TuSimple is also the first self-driving truck unicorn. 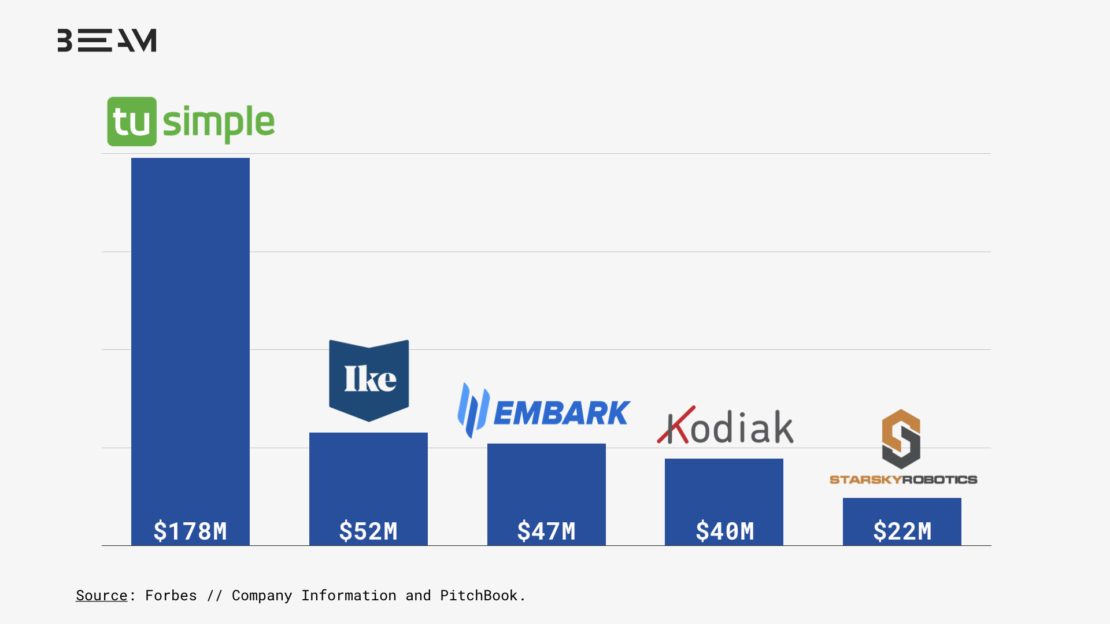 Also, let’s not make the mistake of counting out wildcards such as Waymo, a unit of Alphabet, the parent company of Google. In 2018, Waymo started testing its sensors and software that already successfully navigate minivans, on trucks. If Waymo wanted to commit more of their efforts to trucking, its deep pockets could likely fund a fleet larger than all the startups combined.

Why are investors this bullish about the space?

Autonomous trucks are likely to become a commercial success earlier compared to self-driving cars, as they are benefiting from the relatively simpler programming of a truck that spends most of its time on highways compared to cars on crowded city streets. At the same time, a driver shortage for semi drivers and the chances of drastically shifting cost structures, consumption patterns, the utilization of trucks and maybe also the cost of consumer goods are propelling its optimistic prospects.
Due to these market developments, trucks will very likely autonomously haul cargo long distance between warehouses in the short- to medium-term. The goods will then eventually be transferred to crewed vehicles for local delivery.

Lower costs are the most apparent consequence of autonomous trucks, but effects are very likely to ripple through the entire logistics industry suggesting shifts in cost structures, consumption pattern, operating models and maybe also the cost of consumer goods. TuSimple, for example, claims that their sensor allows seeing as far as one kilometre ahead enabling it to regulate speed and lane position better to cut fuel costs by up to 15% a year.

According to a report by McKinsey, operating costs could decline by about 45% with full autonomy raising the interesting question of how these savings will be shared. Will shippers and carriers divide the lower costs or might they be passed on to the consumer, in the form of lower prices?