The cylindrical shell of a nautilus grows with the animal and offers insights in how logisticians can plan the extension of factories when new products are introduced, or larger volumes are produced.

Factories are built to function as efficiently as possible; however, challenges arise when the production setup changes to accommodate new products, or the output is scaled up significantly. Therefore, logisticians need to design work floors in a way that the future expansion of the space does not impede efficiency. Growth processes that occur in the animal world can be an inspiration to solve these challenges.

Which solutions does the animal world have to offer?

Already in the 12th century, the Italian mathematician Fibonacci described a sequence of growth processes in the animal and plant world. The nautilus is an animal that does grow its shell with the same mathematical precision as described by Fibonacci, a cephalopod common in the deep slopes of coral reefs in the Pacific Ocean.

Their bodies are characterized by tortuous shells, smooth and with compressed or pressed vertebrae ending in a tubular, generally central siphon. The nautilus is born with only four chambers, and at first, it lives in the outermost of these divisions. While it grows bigger, it starts developing new chambers to accommodate its larger body. Over its lifetime the nautilus can grow its spiral shell to up to 30, sometimes more than 38 chambers, separated by partitions.

The old chambers don’t stay uninhabited and wasted, but serve to help the nautilus in his urge to move. The septums between the individual divisions are pierced in the middle by a tubular channel. It is useful as it allows filling the outgrown chamber with a gas-mixture liquid to regulate the nautilus’ motions from the depths of the ocean to the surface and back down again.

What happens if you plan factory layouts according to Fibonacci spirals or let a factory grow and expand according to this strategy?

The layout in the shape of such spiral makes sense as it can grow and expand continuously. In analogy to the spiral tube running through the biological outer shell of the nautilus, the transport route may be designed similarly between different working stations.

However, it also allows for slight variations: For example, the layout depicted in the picture on the right doesn’t have this central path. Instead, the spaces between the operational resources (grey areas) are used for transportation. In this example, the shape of a nautilus shell is combined with a heuristic circle method to optimize the space for storage and movement of goods. It is in the spirit of the nautilus – you control transport costs by continuously expanding its size in a rather circular manner.

Pilot studies have already shown that such an arranged layout of a factory has the potential to significantly reduce the transport costs for complex and non-linear material flows. 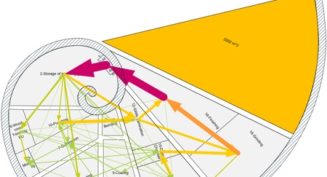