Is this the Smartphone Moment for Industrial AR?

A few weeks ago, Microsoft launched the HoloLens 2, an AR headset that is solely designed for workers in industrial manufacturing environments. We take a more detailed look at the HoloLens 2 and discuss its larger implications.

The ubiquity of information has changed the very nature of how most of us work. So far, this change has primarily affected information workers using laptop, tablets, and smartphones. For workforces on factory floors, service technicians out in the field or customer-facing workers who can’t easily integrate such devices into their daily work, change has been slower.

For them, it is essential that data is accessible in the context of their physical workspace. Looking at recent developments, augmented reality seems poised to entirely reshape the way industrial workforces work by allowing a more natural way of approaching their tasks and blending data directly into their workspace.

From what we have seen so far of the HoloLens 2, it seems like the most advanced AR headset on the market (or soon-to-be-on-the-market, it will be released in late 2019). It is much more immersive, offers more comfort and a higher out-of-the-box value than its predecessor and other headsets on the market. Most of the computing power is placed at the back of the headset, making it less front-heavy compared to its first version and thus more comfortable to wear. As it is very much focused on utility, it is aimed to become a central tool to improve employee’s productivity, training, and customer service.

It is best to start with getting a better understanding of the technology that is built into the HoloLens 2.

Already back in 2016, Microsoft filed a patent to utilize MEMS(microelectromechanical systems) laser-scanning technology to expand the field of view by using a system of mirrors. This allows the field of view to have “more than doubled” compared to the previous HoloLens which had a 34-degree diagonal field. Also, the resolution has improved to 2k displays for each eye.

In order to know where to project the holographic images into the wearer’s pupils, the HoloLens 2 comes with a variety of sensors to always know the head position relative to the surrounding space. Furthermore, Microsoft improved their eye tracking cameras to automatically calibrate the inter-pupillary distance to reduce eye strain. These cameras are also used as retina scanners abolishing the necessity to ever type in a password again.

HoloLens 2 works without a controller as its hand tracking technology recognizes up to 25 points per hand allowing direct manipulation of holograms to resize or move them as well as to push virtual buttons.

To link the physical and the virtual world, Microsoft is introducing “spatial anchors”. The HoloLens 2 automatically creates a map of the physical space in which the AR content is hosted, these anchors are then stored as 3D coordinates in Azure Cloud. This also enables people to access them to cooperate with their colleagues without a HoloLens 2, but across smartphones and tablets. The link to Azure also opens up the possibility of offloading specific computing tasks to the cloud. The remote rendering might take some additional seconds to process. It will be interesting to see how enterprise customers will deal with this latency as it also allows for a less powerful headset making it lighter and more comfortable to wear.

Aside from the technical improvements one could expect, Microsoft’s solid commitment to being open is what surprised many. During the launch event, HoloLens inventor Alex Kipman made three key commitments for the company’s Mixed Reality platform:

This marks a significant change for Microsoft’s strategy as they are embracing competing app stores and keeping the APIs and drivers models open. It opens up the opportunity for companies and developers to start investing money and time to build applications to enrich the HoloLens ecosystem. Something we have seen before, when the iPhone and the App Store were introduced in 2007 and 2008. It led to an explosion in growth for the business of app development itself.

A New Dimension of Work

Today, AR has already begun to enable workforces to interact with digital content in new ways. As physical and digital experiences are increasingly converging, the way people work, learn and communicate will continue to change.

But where does the industry stand today? Have AR solutions already been integrated into their workflow? According to a survey by Harvard Business Review, 67% of the surveyed companies are “actively exploring” and “piloting” mixed reality use cases, but only 20% have actually started deploying it. 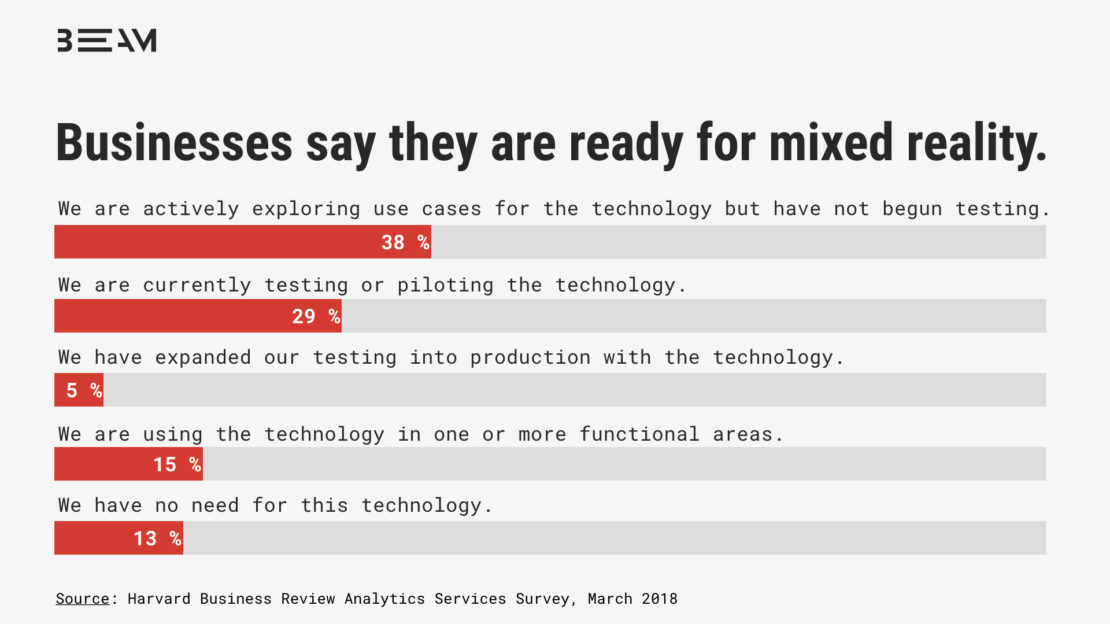 HoloLens 2 seems to be the the most advanced device that allows AR to truly become a tool for getting things done in industrial settings. The range of applications seem limitless: holographic sets of instructions will tell workers in e-commerce warehouses which quantity of which products they need to pick, it will enable remote maintenance and fixing processes, workers will be guided through their work and mistakes can be recognized instantly, facial recognition will ensure that workers at specific workstations have the required training… to just name a few.

We are excited to see what’s ahead for industrial AR solutions and discover how Microsoft might lead the way.